TOM KAMINSKY, a traffic reporter for WCBS NEWS Radio 88, spends most afternoons perched in a helicopter looking for the unusual. What caught his eye one day as he gazed through his plastic bubble 1,500 feet above street level was a patch of green.

“It was a roof garden on one of the buildings in midtown, and it was really beautiful.” Mr. Kaminshki said. “That’s when I realized that there are many of these little gardens on roofs all over New York. Little patches of green sitting high in the sky.”

The little patches of lush green gardens perched on the roofs and terraces of New York City buildings number in the hundreds and probably thousands, making for a particularly intriguing sight from the air. Many are private gardens, put there by renters or apartment owners with access to terraces or patios. Others are communal gardens installed as an amenity for residents.

They are installed at highly varying costs, but what the larger roof garden seem to have in common, according to real estate specialists, is that planning, money and perseverance are required to build them successfully. 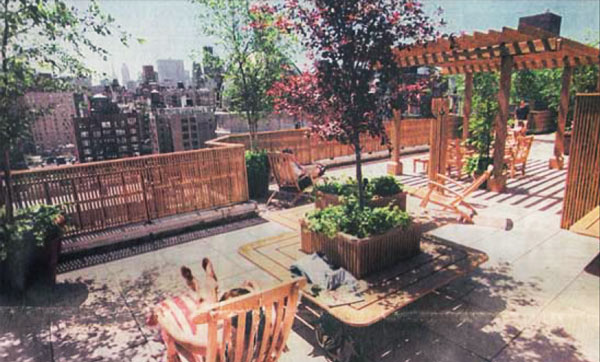 “Roof gardens can be wonderful or they can be a nightmare,” said Ronni Lynn Arougheti, president of Heron Ltd., a Manhattan property management company. “It all depends on whether they’re properly designed, properly installed, and properly maintained.”

Ilyse Fink, a spokeswoman for the Department of Buildings, said that she was unable to estimate the number of roof gardens in New York City. Many have undoubtedly been installed illegally without permit, Ms. Fink said, and those that do have permits have a general alternation permit, a type that does not necessarily include roof gardens.

“From a safety perspective they should be getting permits,” she said.

As a result, Mr Vitelli said, anyone contemplating a private garden – as well as well-intentioned residents determined to spruce up the roof – should first consult the building’s engineer, to determine whether a garden is feasible and insure that if it is, it is installed properly and with necessary permits.

“Some co-op boards don’t allow any plantings at all,” Mr. Vitelli said. “And if we had it our way, that would be standard practise.”

Even in buildings with sturdy roofs, strict rules and happy shareholders, a roof garden would be of little use without plants.

“A roof garden can cost anywhere from $5,000 to well over $100,000, depending on what you want it to look like,” said Philip Roche, a landscape designer with Plant Specialists, the Long Island City company that designed and installed the Queen Anne’s roof garden. The cost for an average sized roof garden is about $50,000 for buildings that something between unadorned decking and horticultural extravagance.

The most significant factors in designing a roof garden are the amount of money and space available and the amount of weight the roof can support. “Years ago there really wasn’t much control over roof gardens,” Mr Roche said. “But now buildings have to be strict about conforming to city codes.”

There are requirements relating to entry and egress, he said. As a result, gardens must be designed not to interfere with required exit doors. Height requirements for parapet walls must be followed if people will be using the roof for recreational purposes, he said, even if such recreation consists solely of sunbathing or meditating on the beauty of the skyline. Designs are adjusted to comply with codes, and the plans are presented to the building’s engineer for suggestions or modifications.

And that, he said, offers another example of the utility of planning a roof garden long before the first potted plant takes root.

“We were working with the engineer at the Queen Anne even before they started working on the roof,” Mr. Roche said, explaining that such early involvement made it possible to instruct the roofing contractor to modify the substructure of the roof during reconstruction so that it could accommodate a garden.

Once that was done, Mr Roche said, the company was able to exercise broad latitude in deciding what kind of plants and planters to use and how densely they could be installed.

“Everything that goes on a roof today is usually removable,’ Mr Roche said. A fundamental rule of roof-garden design is that the soil the plants are put in should never come in contact with the roof surface itself.

Instead, modern roof-garden design employs industrial strength yet lightweight planters on terra-cotta tiles that are themselves elevated above the roof surface.

In the Queen Anne, after the new roof was installed, Plant Specialists laid down concrete paving tiles in the area that was to be used for the garden. The tiles were set on a plastic pedestal system that elevates them a few inches above the roof surface and provides a concealed space through which irrigation pipes and wiring for lighting can be run. Once the tiles were down, Plant Specialists brought in the planters.

“We use a lot of fiberglass, a lot of wood, a bit of clay and rarely we’ll use stone,” Mr Roche said, adding that the planters themselves are constructed off site at the company’s headquarters. In most cases, he said, roof garden planters are designed to spread the planter’s weight over the greatest possible area while keeping the planter body slightly elevated above the surface. Allplanters have drainage material and filter cloths at the bottom to insure that any water that seeps out is free of soil or other solid material, he said.

Mr Roche said that the planters are usually transported to the roof empty and then filled with soil and plants. In the Queen Anne, however, the tree-filled planters were hoisted up the side of the building.

“in this case the co-op board wanted the garden to be a park like place that required as little maintenance as possible,” Mr Roche said, so 14 trees were installed with ivy growing in the soil around the trees. Most of the planters, he said were constructed of cedar with benches attached. All, he said, have automatic watering systems and lighting fed from piping and electrical wiring run up through the pavers and into the bottom of the planters.

The garden was finished with a wisteria-covered pergola, some teak steamer chairs and other chairs and tables. Total cost : $80,000.

And why would a board spend so much on 14 trees, some ivy and a few deck chairs? “It gives life in the city another dimension,” Mr Roche said. “It keeps you sane.” 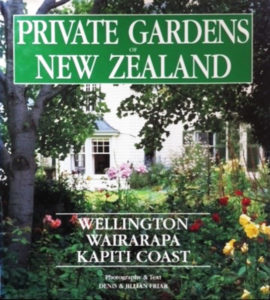 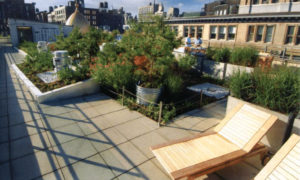 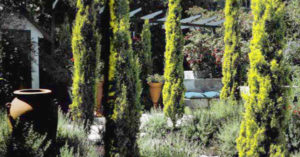 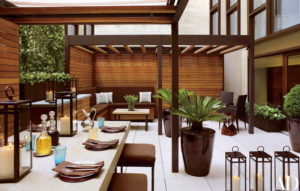 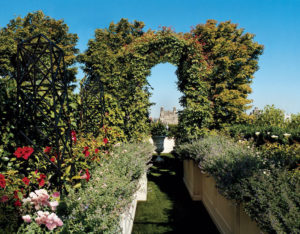